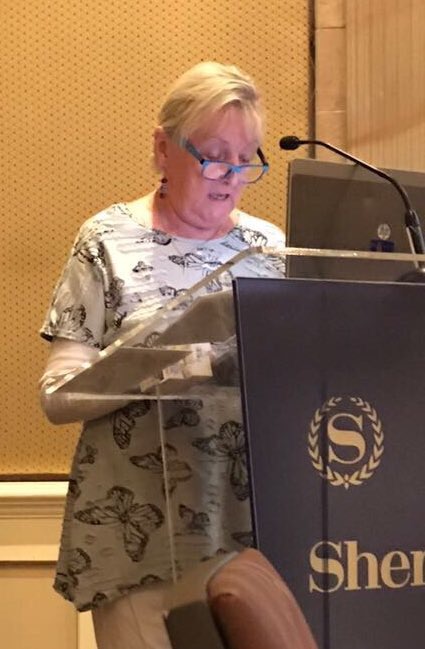 It is with immense sadness that the Fix the Patent Laws (FTPL) Coalition shares the news of the passing of a dear friend and brave patient advocate, Sue Johnson. Sue was a mother of two children and grandmother to two girls. She was born in the UK and moved to South Africa in 1983, where she spent her life working for the UN and Habitat for Humanity in Cape Town until her retirement in 2017.

Sue was also a prominent patient advocate for access to lenalidomide – a medicine prescribed for multiple myeloma – for the Cancer Alliance and FTPL. She spoke bravely and passionately of the struggles she face in accessing the medicine she needed at an affordable price, most memorably at the stakeholder meetings hosted by the Department of Trade and Industry on Intellectual Property Reform in October 2017 and at the Cancer Alliance launch of the Access to Medicine campaign in January 2018..

Sue was diagnosed with Breast Cancer in 2008 and with Multiple Myeloma in 2014. While she was initially able to access a generic lenalidomide treatment from India on a Section 21 authorisation from the Medicines Control Council at a price of about R5000 per month, this was revoked in 2016 when the originator product from Celgene, Revlimid, was registered in South Africa, at a cost of R882,000 per year. Sue’s medical insurer agreed to cover the increased cost of nearly R75,000 per month – but only for four months. After that, Sue and her family had to struggle to get the rest from their own pockets.

Secondary patents will block more affordable generics from entering the South African market until at least 2028. This means that equitable access for patients like Sue is a long way off.

“I remember that day very well, when everything changed: one day I had the support of the MCC and was able to import my medication from India. The next day the MCC took away my authorisation and my right to access generic medication. The registration of the patented product changed everything for me with just the stroke of a pen. Overnight I could no longer afford the treatment I needed to live.”

Sue will be remembered by all for her bravery and unselfish desire to fight for equitable and affordable access for all – despite knowing that she might not be able to benefit from it.

FTPL salutes Sue and will continue the fight for equitable and affordable access to lifesaving medicines for all in South Africa in her memory.

More information on lenalidomide and the battle for equitable access

With the FTPL and Cancer Alliance, Sue’s doctor, Dr Mike du Toit, appealed the MCC’s decision to deny the importation of generic lenalidomide into South Africa on the basis that the patented product was unaffordable and thereby inhibited access to patients in need of the life-saving medicine. In his appeal, Dr du Toit highlighted previous precedent of the MCC authorising the use of unregistered products on the basis of affordability concerns. The MCC’s 1 November 2017 decision to authorise importation of generic lenalidomide in response to Dr du Toit’s appeal ‘based on the previous use of the medicine and to allow for continuation of treatment’ further establishes precedent for the use of Section 21 to address affordability concerns.

A recent report by the Cancer Alliance and Fix the Patent Laws demonstrated that many important cancer medicines remain inaccessible to the majority of people that could benefit from them in South Africa while under patent due to their excessive costs. The report further highlighted that South Africa commonly grants patents that are rejected, withdrawn or overturned in other countries – blocking access to more affordable generic products already available outside of the country.

While Section 21 authorisations can improve access to generic products and should be applied more broadly for this use, the mechanism has limitations, including requiring detailed individual patient information, limiting patient numbers and, in some cases, dragging on for months or years through multiple appeal phases.

The lenalidomide case therefore further highlights the urgent need for expedited, administrative compulsory license provisions to license the use of generic products in South Africa when patents inhibit access.