This month, Argentina joined the ranks of countries making it harder to get a patent for ‘inventions’ which offer little to no real improvement over existing drugs. The detailed guidelines, issued jointly by Argentina’s patents office and health department, can be found here.[1] The guidelines instruct patent examiners to reject (with some exceptions) new use, new form, and new formulation patents,[2] and specify a number of other frivolous changes to drugs which will no longer be acceptable.

Under TRIPS, countries are free to determine for themselves criteria of novelty, inventiveness and usefulness. Argentina’s move therefore, is completely allowed under international law. And they are not alone – the patent regime of the Andean Community countries (Peru, Bolivia, Colombia, Ecuador and Peru) rules out new use patents, and in India, patent applications which cannot demonstrate enhanced efficacy over existing drugs will be rejected.

But in South Africa today, the criteria for patentability are not high, and patent applications are not being checked for their inventive qualities. Our patents office operates rather as a registration office. This means that as long as an application meets administrative requirements, a patent will generally be granted unless someone opposes it (with legal opposition by the public in this country being difficult and costly). This has led to a situation where South Africa is granting far more patents than many comparable countries (see figure below).[3] 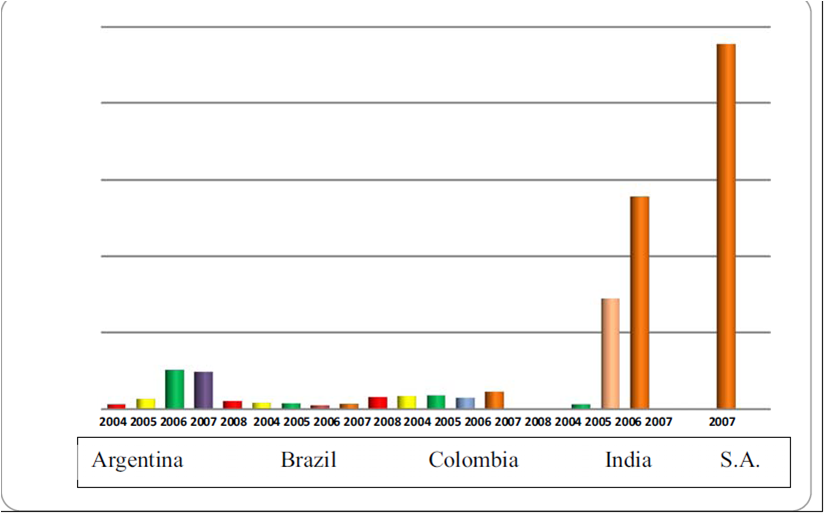 Our campaign is arguing that in respect of how patents are granted in South Africa, three things need to happen:

South Africa should join Argentina and others in moving to a system which only rewards true innovation. We can do this by changing our laws to crack down on frivolous patenting. This will make way for more generics to enter to the market, and ultimately drive down prices.

[1] Adoption of Guidelines for Patentability Examination of Patent Applications Directed to Chemical and Pharmaceutical Inventions, Joint Resolution 118/2012, 546/2012 and 107/2012, available at

[3] Note that the higher number of patents granted in India is widely attributable to the ‘mailbox’ provisions, or the backlog of patents for the 1995-2005 period, processed in 2005, when India began granting pharmaceutical patents for the first time. Table source: Correa C, IDRC report, Pharmaceutical Innovation, Incremental Patenting and Compulsory Licensing http://idl-bnc.idrc.ca/dspace/bitstream/10625/47912/1/IDL-47912.pdf